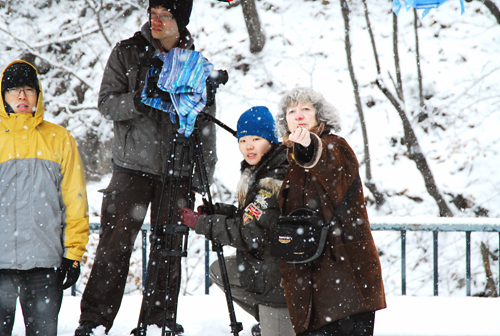 When Ottinger visited Seoul for the first time, she was inspired to make this documentary using Korean traditional color and aesthetics. The meeting and marriage of a man and a woman, and the wedding ceremony were filmed against the backdrop of a temple, Nam-san (the mountain south of Seoul), Yang-ryung market, and various other Seoul vistas. Following the special wedding tradition after the oath of marriage, the couple even went up to Nam-san to conduct a ceremony to seal a lock which symbolized their love. We might ask, is this all worth it? There might be different meanings for each of the ceremonial rituals involved in the wedding. With the eyes of a German director, Seoul is revealed in its spaces in which old and new coexist with and contest each other. However, in here and now, are all women happy? [BYUN Jai-ran]