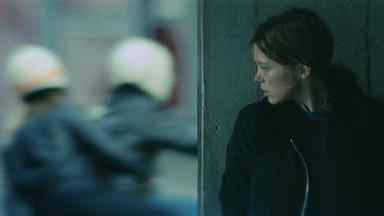 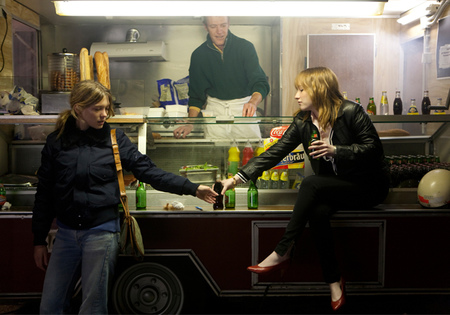 17-year-old Prudence is suddenly alone and adrift in the family apartment. She meets Marilyne, a high school misfit who introduces her to the illegal race circuit of Rungis where souped-up mopeds and muscle bikes race against each other, undaunted by danger. Fascinated by Reynald, Franck and the other guys from the Rungis clique, Prudence tries to find a place for herself by passing off her loneliness as freedom.

Alone in her flat days after the death of her mother,
her sister off on her own and her father in Canada,
Prudence is looking for a distraction that she finds
in the world of motorcycle racing. We all mourn
differently but Prudence is not mourning after the
death of her mother. It is because she does not know
how to mourn. Although mourning and teen crisis
are frameworks for the story, the film does not depict
mourning as something spontaneous and teen crisis
as something to overcome. Prudence looks up to
those in the racing circuit and desires an opportunity
to fit in with a group of others even if she is only
becoming an object of sexual desire. Her behavior,
only seen as teenage rebellion to others, is one of
the banal things she must explore in her life such as
family, religion, music, and friendship to make sense of
what is going on. The film slowly looks at the process
of Prudence understanding who she is and eventually
learning how to mourn. It is worth noting that even in
the quiet and static scenes that make a contrast with
the fast and noisy motorcycle racing scenes, Léa
SEYDOUX beautifully captures a confused 17-year-old
girl and delivers nuanced performance, emoting with
the slightest glance or turn of the head, and that the
film is accompanied by gradually increasing music
focusing on melody in every important scene.
[CHOI Jinah]