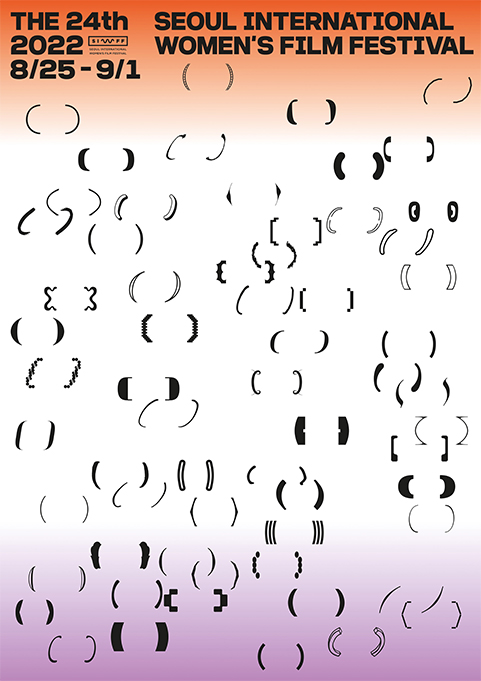 See the World through Women’s Eyes!

The 24th Seoul International Women's Film Festival invites the audience to a festival where they welcome, watch, and listen to each other with the slogan "Let us meet at (   )". The pandemic that has lasted for several years is coming to an end while leaving countless questions about the future and coexistence. In 2022, when women have become more important than ever as a social and political group after the popularization of feminism, we propose a connection and encounter between women while acknowledging diversity and differences of each other. (   ) is a theater, an online space, a value we aim for, and also a road through where our hearts are connected. Let us meet at the 24th Seoul International Women's Film Festival!

The 23rd Seoul International Women's Film Festival invites women who are enduring and breaking through the era of pandemic and feminism backlash under the slogan of "A Caring Reflection", which contains the meaning of caring, looking after, consideration and reflection. It is a proposal to support and care for each other, to reflect on yesterday and the present, and to share the unique values and intentions of a women's film festival toward tomorrow. We will care for and look back on as far as 100 years ago, the 1970s of global radical feminism, the beginning of the 21st century, and the lives, struggles, and hopes of women living every day of today.

Care for and look back on the lives of women in the 21st century: 20th anniversary exhibition on Take Care of My Cat, a special retrospective section on Bae Doona

We planned and produced a digital remastering version of Take Care of My Cat in collaboration with Barunson E&A and Plain Archive, and it will be presented for the first time in SIWFF. The scenes from the film, which meticulously depicts the lives of women in their 20s who have just entered society in the IMF era, overlaps exquisitely with the reality of women of today living in the Covid-19 era. The special exhibition of Take Care of My Cat that presented a new example of Korean women's films in the 2000s, will provide a deep solidarity and comfort that transcends time and generation.
The special retrospective section on Bae Doona, who embraced everyone in Take Care of My Cat, is also another main program of the festival. The solid filmography she built across the boundaries of language, countries, and characters is irreplaceable what symbolizes actress Bae Doona. We retrace the path of a free and sincere adventurer, who walks on her own pace for over twenty years.

In the “Polemics” section, which selects the most urgent women’s agenda every year and screens related films. This year, under the theme of “Revisiting the Radical” we collected films that document the memories and history of the 2nd wave of feminist movement around the world and the films that document the new feminism of the current generation. We also run a related forum asking questions about the meaning of 'radical' in the past and in the contemporary feminism, and the future of feminism.

In addition, “Feminist Collective”, a section that explores and looks back on the history of women’s filmmaking, has a theme of “Women’s Filmmaking in Asia”. This year, we present “wom”, a feminist video activism group celebrating its 20th anniversary and a feminist culture and art planning platform, “ZOOMANET” which also celebrates its 20th anniversary. We also collected films directed by women at Yangon Filmschool in Myanmar and the films directed by female directors in the Japanese labor unions. In “Australian Women's Filmmaking”, that is presented in collaboration with Australian Embassy, we collect everything from silent films of the 1930s to radical feminist experimental films, postcolonial aboriginal films, and commercial genre films reflecting on the history writing of women’s filmmaking and their relationships with other concurrent women’s films in the world.

Caring for daily lives, looking back: “The Landscape of Here and Now: A Place of Her Own”

This is a new section in SIWFF 2021 showcasing recently made Korean films and proposing to ponder over contemporary women’s daily lives from an intimate feminist perspective. The theme of this year’s section is “A Place of Her Own,” focusing on the space where women reside in films. We noticed a certain trend that a space could not become a place anymore for women in various behaviors. Through Ghost Walk, An Old Lady, Ten Months, The train passed by, and Way Back Home, we talk about the vague sense of place that women here and now feel.

Care for women’s films of now and next: Films in competitive section and new hot topics

SIWFF’s feature competitive section “Discovery”, which was established in celebrating the 20th anniversary in 2018 screens has its 4th year. It gathers high quality entries from all over the world, becoming a platform to introduce new female directors with great talent and vision. “Asian Shorts”, which has built a history as a competitive program since the beginning of the SIWFF, has secured its position as a gateway for female directors in Asia with highest number of entries and the diversity of the entry regions this year.
“New Currents” that screens recent films produced within 1-2 years presents films that observe women in current times and introduce a new perspectives and way of seeing the world including Tove, the opening film, Shirley, Miss Juneteenth, Shiva Baby, Padauk: Myanmar Spring, Terra Femme, and 2 Lizards. In “Queer Rainbow,” where show new queer films, we can notice the films that reflect on the history of queer creative arts and that attempt variations on lesbian queer romance stand out.

The annual meeting of the Conference for the Network of Local Women's Film Festival', launched by activists from 14 regional women's film festivals, including Seoul, Incheon, Daegu, Gwangju, and Jeju, is an important event of SIWFF. At the 23rd SIWFF, we plan to discuss the direction of the film festival in the post COVID-19 era, and in-depth discussions about the challenges that the regional women's film festivals face and the common interests of the network(Network of Local Women's Film Festival) as a whole. On the other hand, at the program “To Friends Out There", we will invite and connect with overseas women’s film festivals and female filmmakers that we have had a long-standing relationship through online live broadcasting. Discussion coverage will include current women’s issues, regional feminist movements, and the future of films and film festivals in the Covid-19 situation, and the characteristics of the audience in each region.

Caring for the Film Festival and the Future: Online screening and contact free events

The 23rd SIWFF continues the value created by a film festival that is watching films together in a safe way, while expanding the limitation of offline event by running an online film festival. Half of the screened films in the festival will be screened simultaneously online and offline, and the program events will be pre-recorded and will be live streamed online so that the festival operates completely without spectators. 66 films that are online screened (44 feature films, 22 short films), including films in the competitive sections such as "Discovery", "Asian Shorts", and "I-Teens" will be on ONFIFN, an exclusive screening platform for film festivals. Also, talks with Bae Doona, Kim Ah-joong X Byun Young-joo, Star talk by Moon Ka-young, Special Talk for the 20th Anniversary of Take Care of My Cat, “To Friends Out There”, and director-to-director events will be broadcast live online. The special talk, stage greetings of foreign directors, and the Australian special section Forum will be pre-recorded and streamed.