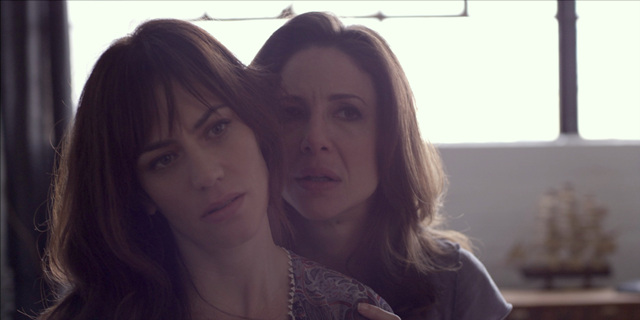 Synopsis
After Abby, an attractive 40-something housewife, is smacked in the head by her son’s baseball; she begins to yearn for something else, something more than her banal suburban life. Determined to take on a new project, she buys a pied-a-terre in Manhattan. But walking around the city streets reminds Abby of what it feels like to be sexy and her pent-up libido compels Abby to invent a secret life that draws her deeply into the world of high-end prostitution for women.

Program Note
One of late queer cinema trends, which is gradually becoming mainstream, is re-appropriating straight cinema into queer cinema.
In this case, the queer director drags heterosexual film’s genre standards and familiar devices into the center of queer narrative.
Stacie PASSON in Concussion utilizes the strategy of art cinema, which distorts bourgeois ideal about loyalty to marriage, to
provide an allegory about heterosexual-like lifestyle of the queer after homosexual marriage is legalized or the life of LGBTQ
community after being institutionalized. It especially focuses on lesbian marriage.

Abbey is a rich lesbian housewife with two kids. When she gets hit on her head with a ball thrown by her son, she falls into rampant
skepticism about her life as a housewife. At the moment she feels her shining flame is gone for good from her life and departs
from the ideal of one-on-one relationship. Working together with the symbol of new queer cinema Rose TROCHE, Stacie puts
provocative subjects such as women’s sexual deviation and prostitution while she presents totally different mise-en-scene from
the camera’s sight that similar films can easily take. The film achieves a differentiated method of visualization and meaning using
a female director’s camera which focuses on women’s body, women’s desire for women, and women’s unique way of making
relationships. [HONG So-in]